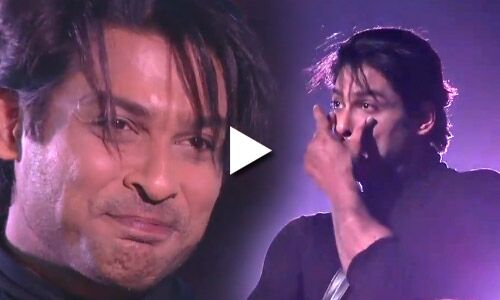 Bigg Boss 13: A video of Siddharth Shukla is going viral. In which he is standing on a platform and fans are cheering him around. During this, Bigg Boss showed him the journey of the show. He became emotional after seeing the old moments of his friendship with Asim. You can also watch this video … As if the finale of ‘Bigg Boss 13’ has just arrived. Mahira Sharma became homeless before the finale. Bollywood actor Vicky Kaushal came to pick Mahira. On seeing Mahira leaving the house, Paras started crying bitterly. After the departure of Mahira Sharma, the show has now got 6 finalist contestants, who are Siddharth Shukla, Shehnaaz Gill, Aarti Singh, Rashmi Desai, Paras Chhabra (Paras Chhabra) and Asim Riaz. Although only the top 5 contestants go to the finale in the Bigg Boss season so far, but the 13th season is a bit crooked. So there are 6 contestants in the finale.

In the video, Siddharth (Sidharth Shukla) becomes emotional and tears in his eyes after seeing the special moments of his friendship with Asim Riaz. After the video is over, Siddharth thanks him for supporting the fans present there. Bigg Boss gives Siddharth the tag of Zero along with the Hero, just as Zero is important in Mathematics, so is his importance in the show. After watching his video, when he comes in, he hugs Asim. Let us tell you that the show (Bigg Boss 13) started on 29 September 2019. In the show, 13 people had entered the house, but gradually the journey of the families went on and only 6 contestants were left. It will now be seen who among these 6 contestants takes this season’s Trophy (Bigg Boss 13 Trophy) with them. Abbas Zafar will make a remake of ‘Mr. India’, Ranveer Singh will be ‘Mr. India’ and ‘Mogambo’ will be Shahrukh Khan